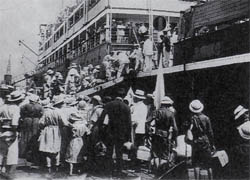 The Far East Youth Association was established by alumni from Siberian Children Centre in Wejherowo in 1929-1939. Its aim was to support and integrate Siberian Children, as well as to keep the siberian traditions. They also worked for the good of their homeland. Jerzy Strzałkowski took the chair of the association and continued in this position until the WWII outbreak. Initially, only a dozen or so members belonged to the association, yet after a few years the association had more than 600 members. It also started to operate nationwide, opening its units in Poznań, Łódź, Lwów, Radom and Gdynia.

The Far East Youth Association was also publishing its own newspaper called “Młody Sybiriak (Young Sybiriak)”. It was later renamed to “Echo Dalekiego Wschodu” (Far East Echo), as to pay respect to Anna Bielkiewicz and the magazine she had been publishing in Tokyo. The last edition of their newspaper was published in April 1939.