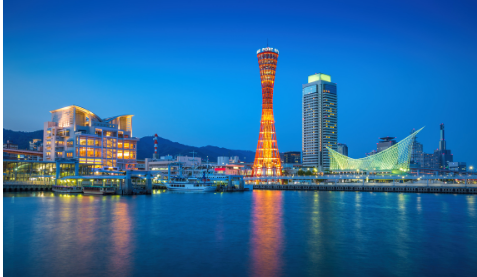 A series that follows the path of Siberian Children.

In the previous article, we introduced Osaka as a place where 390 children stayed.
When they left Japan for Poland, they departed from Kobe Port.

This time we would like to introduce Kobe – the capital of Hyogo Prefecture and one of Japan’s 10 largest cities. Located between the sea and the Rokko mountain range,
Kobe is also considered one of Japan’s most attractive cities.

Kobe has been an important port city for many centuries.
Kobe Port, along with Yokohama, Nagasaki, Hakodate, and Niigata ports, was first opened to foreign trade in the 19th century.

The Siberian Children who stayed in Osaka said “Good bye” to Japan from here and went back to their country via London.

The Honorary consulate of the republic of Poland The Great Hanshin-Awaji Earthquake occurred on January 17, 1995 at 5:46 a.m. in the southern part of Hyōgo Prefecture.
The 7.3-magnitude tremor, the first recorded at the maximum 7 on the Japanese intensity scale,
damaged 640,000 houses and caused the death of 6,434 people, making it at the time the country’s deadliest earthquake since World War II.

During the summer vacation of that year, 30 children affected by the disaster were invited to Poland.
The following year, 30 other students were warmly welcomed. All of their travel and accommodation expenses were funded by Polish companies, individuals and local governments.
They said that they would like to return the favor to Japan saving the lives of Polish children 75 years ago.

During the second visit to Poland in 1996, the Japanese children met 4 former Siberian Children and received heartfelt words of encouragement and roses, a symbol of peace.
The bond of “humanity” connects the two countries for generations.