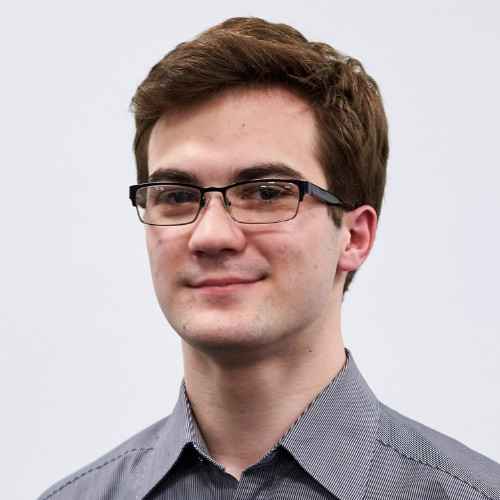 Łukasz Grabowski
Born in 1997. Lives in Warsaw, Poland. The great-grandson of Mr. Jan Jankowski, one of the Siberian Children. While studying at Warsaw University of Technology, he has been actively participating in events related to Siberian Children with his uncle, Mr. Tadeusz Cytrynowicz. He has visited Japan once as an internship student. During his stay in Japan, he visited places associated with his great-grandfather, including Tsuruga City in Fukui Prefecture.

Yumi Yoshida: Thank you very much for your time today. It is a great pleasure for me to have the opportunity to hear your story as the first interview project with the descendants of the Siberian Children. First of all, could you tell us about the relationship between you and your great-grandfather, Mr. Jan Jankowski, who came to Japan as one of the Siberian Children?

Mr. Lukasz Grabowski: Jan Jankowski is my great-grandfather. Unfortunately, I have never met him, and since he died at the young age of 31 during World War Ⅱ, his son, my grandfather (1 and a half years old at that time), doesn’t remember much of Jan.

Yumi: Mr. Jan’s life was tossed about by the times. Do you have any stories that have been passed down to your family, such as about life in Japan?

Lukasz: Unfortunately, there aren’t many stories about Japan that have been passed down directly from my great-grandfather. However, he kept a diary of his cousin who was with Jan in Japan. It is written that the children were singing the Japanese national anthem.
Japan was a very far country for my grandparents (the generation of the Siberian Children’s children). I guess they only knew Japan from historical facts. However, since my great-grandfather was in Japan, I feel closer to the country than before. Actually, it was only a few years ago that I found out that my great-grandfather had been in Japan. My uncle told me the fact right after I received a chance to participate in an internship in Japan.

Yumi: I thought that you had an internship in Japan because you knew the connection between your family and Japan!

Yumi: Why did your uncle know that Mr. Jan was in Japan?

Lukasz: My uncle’s mother, Bronisława, told him. She was too young at that time to travel to Japan, but fortunately she was able to return to Poland with her family. She told her son, my uncle, that her three brothers, including Jan, had been to Japan.

Yumi: How did you feel when you discovered the historical fact that your family was in Japan? I am wondering how Polish people feel when they learn such facts.

Lukasz: I don’t know about other families, but for me, the history of my family, especially in the early 1900s, was full of hardships. On the other hand, considering the historical background, I also thought this was just an ordinary thing. Therefore, I was surprised that there was such an important fact worth remembering in my family history. I feel very fortunate that this fact was uncovered before it was forgotten. As a person who knows the fact, I feel a sense of responsibility, and I want to make use of my connections in the future.

Yumi: You said that you feel a sense of responsibility, but we feel the same way. I have no direct blood relationship with the Siberian Children, but as a person who knows the history, I feel that I have a responsibility to use this connection in future society. As a descendant of the Siberian Children, do you have any hopes or roles that you would like to play for society?

Lukasz: I am very happy to know that you feel the same way as me. For me, it is very important to remember the historical facts of 100 years ago, but at the same time, it is also very important to make this history a starting point and have a positive impact on the future of both countries. Even if each of us can do only small things, I hope that learning about history will help many people become more interested in Japan and bring their relationships closer. I myself started learning Japanese, hoping that I could contribute to those activities.

Yumi: It is an important step to let as many people as possible know it as one of the opportunities to deepen friendly relations between Japan and Poland. Do you have the opportunity to contact or meet regularly with other descendants of the Siberian Children or those involved in Poland?

Lukasz: Recently I have been in contact with a few people, including the stepdaughter of Mr. Czesław Jankowski, my great-grandfather Jan’s cousin, who also was in Japan. Unfortunately, however, we don’t have the opportunity to meet regularly. On the other hand, I still keep in touch with the Japanese I met through this historical fact, and I feel very fortunate.

Yumi: Unfortunately, not many of the descendants of the Siberian Children we know for now are from the same generation as us (twenties). Therefore, we are making various efforts to gather as many descendants as possible. When several great-grandchildren gather, how about organizing a gathering like the past Far East Youth Association?

Lukasz: It will be great if we have an opportunity to share how the descendants of the Siberian Children spend their lives. If we can work on something like the publication of “Far East Echo” (In Polish “Echo Dalekiego Wschodu”, a magazine that was published by people who had stayed in Japan as Siberian Children and then returned to Poland), it will be a great starting point for activities that make use of history. I think the magazine functioned as a common activity to bring together the Siberian Children who returned from Japan. I will be very happy if it happens in reality.

Lukasz: I am thinking the same way. I heard that there are quite a lot of descendants, so I hope we can find them.

Yumi: Let me ask you a question about the history of the Siberian Children. How well do Poles generally know about the history? Some reports said that it is widely known in Poland, but what do you think about it?

Lukasz: Unfortunately, I don’t think many Poles know about the history. Most people around me know it because I have talked about it, but it is hard to say that the history is widely known in general. Last year was the 100 year anniversary of the establishment of diplomatic relations between Poland and Japan, so I think the opportunities to see this topic have increased recently, especially in cities. Also, the Japanese Festival in Warsaw, which is held every year, is a perfect place to talk about Japan.

Yumi: The Japanese Festival in Warsaw is certainly a very big event related to Japan in Poland. Let’s move on to the topic of how to get Poles to know about the history of the Siberian Children. What tools do you think are practical and effective? It would be great if it is appeard in textbooks used in schools, but it is very difficult, isn’t it?

Lukasz: Yes, the process will be very difficult. How about visiting schools and holding lectures? When I was an elementary school student, a history teacher invited guest lecturers to give lectures during regular classes. I think it is very good to have an opportunity to tell children and the younger generation directly.

Yumi: That’s a good idea. If we hold lectures by descendants of the Siberian Children, it will be very valuable.

Lukasz: I think so. It will be great if there is a chance to listen to the story from the descendants directly.

Yumi: This is the last question. Is there anything about Poland or its history that you would like to tell Japanese children? We’ve focused on passing on the historical facts in Poland, but I think those activities should be conducted in Japan as well.

Lukasz: That’s a difficult question. I want to introduce a lot if time allows, but first I think it is necessary to disseminate basic information about Poland in Japan. This is because I have came to realize in Japan that it is difficult for the Japanese to recognize European countries correctly, and many people confuse Poland with its neighboring countries. It is understandable because many Poles find it difficult to recognize Asian countries correctly. It is also important to pass on the history of the Siberian Children to Japanese children. In order for them to develop an understanding of their own country, it is meaningful to recognize that Japan has a history of doing great things.

Yumi: I tend to forget the basic things because I am always involved with Poland, but I think the most important starting point is to let Japanese people know about Poland and get familiar with Japanese history at the same time. Thank you very much again for your time today.

Fukudenkai is looking for the descendants of the Siberian Children.
Please contact us (info@siberianchildren.pl) if you have any information.