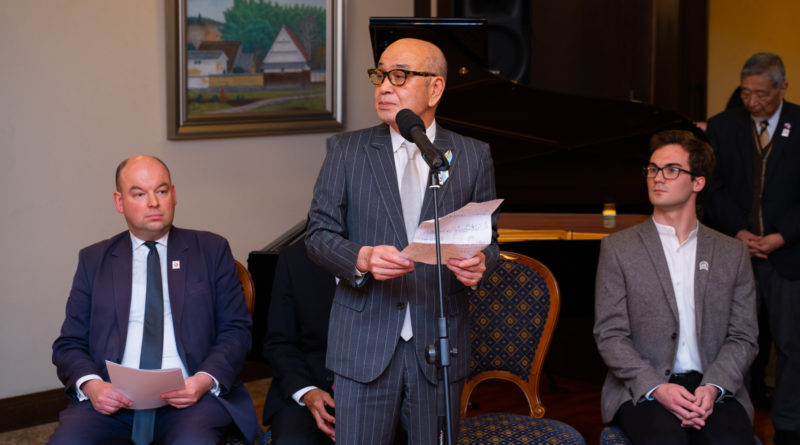 My name is Takaaki Ohta and I am the president of the Fukudenkai Social Welfare Corporation.
I would like to thank you very much for coming to the meeting of the descendants of the Siberian Children today.

Your ancestors were, in some way or even, directly involved in the Polish independence fights. I think the fight for independence was nothing more than just a war.
Your descendants are the heroes of this war.

In other words, I would like to say that all of you who are gathered here today are descendants of heroes.

It is a great pride for the Japanese people that Japan is involved in helping and supporting Siberian Children – Siberian Heroes.
Even though the memory of their life has survived the last 100 years, it is slowly weakening.

Out of concern for the friendship between Japan and Poland, we, the Fukudenkai, believe that we must take care of this history and that is why we organized today’s event commemorating the 100th anniversary of the return of Siberian Children to Poland.

Due to the COVID situation, the great ceremony scheduled for 2020 has been postponed many times.

For this reason, after consulting with the Ambassador of Japan in Poland – Mr. Miyajima, we have decided to create an opportunity to meet you in person,
even before the main ceremony, which is held in 2023.

I believe that this meeting would not have happened without the effort and presence of everyone gathered here,
and in particular without the involvement of all from the Japanese Embassy.

I cannot express my gratitude with just words, but I would like to thank you very much.

In September 2023, we are planning to organize the Great Ceremony commemorating Siberian Children.
I would like to cordially invite you all and count on your cooperation also next year.

I would like to end my words with words of hope that our actions will be the foundation of friendship between Japan and Poland.