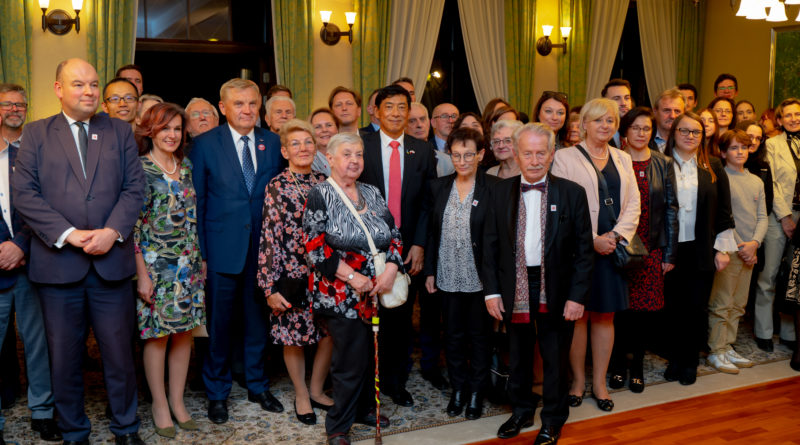 On 7th October 2022, the meeting of the descendants of Siberian Children took place at the Residence of the Japanese Ambassador in Warsaw.

During the meeting, all guests had the opportunity to integrate, exchange stories,
and be interviewed by Japanese and Polish media, and also try Japanese meals and listen to the performance of the Japanese pianist Hidesumi Tanaka.

There was also an opportunity to read books about Children from Siberia,
courtesy of Katarzyna Nowak - deputy director of the Manggha Museum in Krakow.

Each participant also received a pin with the logo of Fukudenkai.

Schedule of the meeting of the descendants of Siberian Children:

All guests were welcomed at the reception desk with the Fukudenkai pin and the meeting program,
and then were invited to the main room of the Residence. I would like to ask you, together with us and with Fukudenkai, to take part in an extremely important project,
which is passing the history of Siberian Children on and making it the foundation of friendship between Japan and Poland.

I am addressing it especially to the descendants of the Siberian Children.
You are a symbol of the friendship between our countries and the messengers who will take this relationship into the future.

Please pass on to future generations these stories you have heard from your parents and grandparents,
as well as getting in touch with other families of Siberian Children.

I am counting on you. -addressed by the Ambassador of Japan to all descendants of the Siberian Children. Link to the full speech of the Ambassador of Japan.

Siberian Children
Speech by Akio Miyajima, Ambassador of Japan in Poland
https://siberianchildren.pl/en/2022/11/08/speech-by-akio-miyajima
Dzień dobry, (Good Afternoon,)Dear All, my name is Miyajima Akio and I am the Japanese Ambassador to Poland.One hundred years ago, the Japanese Red Cross helped to save nearly 800 Polish children from Siberia and transport them to their Motherland.The children who got to Tokyo were taken care of by the Fukudenkai Social Welfare Corporation.This beautiful history of humanitarianism is the foundation of the friendship between Japan and Poland.I am very glad to host many descendants of the Siber...

Your ancestors were, in some way or even, directly involved in the Polish independence fights.
I think the fight for independence was nothing more than just a war.

Your descendants are the heroes of this war.

In other words, I would like to say that all of you who are gathered here today are descendants of heroes.
- Takaaki Ohta was saying. Link to the full speech of the President of the Fukudenkai.

Siberian Children
Speech by Takaaki Ohta, President of Fukudenkai
https://siberianchildren.pl/en/2022/11/08/speech-by-takaaki-ohta
My name is Takaaki Ohta and I am the president of the Fukudenkai Social Welfare Corporation.I would like to thank you very much for coming to the meeting of the descendants of the Siberian Children today.Your ancestors were, in some way or even, directly involved in the Polish independence fights. I think the fight for independence was nothing more than just a war.Your descendants are the heroes of this war. In other words, I would like to say that all of you who are gathered here today are d...

Speech by Jan Dziedziczak -the minister in the Chancellery of the Prime Minister responsible for the Polish diaspora.

Fukudenkai was awarded with the Medal on the occasion of the 100th anniversary of Poland regaining independence.

The Fukudenkai, enabling the return of 700 children to Poland, beautifully took part in the revival of Free Poland.
- mówił Jan Dziedziczak. Link to the full speech of the minister in the Chancellery of the Prime Minister responsible for the Polish diaspora.

Siberian Children
Speech by Jan Dziedziczak, the minister in the Chancellery of the Prime Minis...
https://siberianchildren.pl/en/2022/11/08/speech-by-jan-dziedziczak
Dear Mr. Ambassador, dear Mr. President of the Fukudenkai Social Welfare Corporation, Ladies and Gentlemen Parliamentarian, Mr. Advisor to the President of the Republic of Poland!Dear families of the rescued, dear friends of Poland and Japan!As the mandatary of the government of the Republic of Poland for the Polish Community Abroad’s matters,I would like to thank you for the invitation to take part in today’s event, the 100th anniversary of commemorating the remarkable history of friendship ...

Fukudenkai is a living example of how the story of Siberian children is always relevant and timeless.
Just as the Centre selflessly and good-heartedly helped Polish children a hundred years ago,
today Fukudenkai shows its good heart by helping the victims of the war in Ukraine.
I am delighted that we can host you in Poland. -mówił Łukasz Grabowski. Link to the full speech of the representative of the descendants of Siberian Children.

The guests had a perfect occasion to observe and to participate in the Japanese Tea Ceremony,
which plays an important role in the tradition and culture of Japan.

Participants had the opportunity to listen to 4 songs,
including compositions by Chopin and "Usagi to kame" (A Rabbit and a Turtle)
- a Japanese nursery rhyme that Siberian Children learned in Japan 100 years ago. Photo session of the guests altogether

131 people took part in the event, including 57 descendants of Siberian Children (that is 21 families in total). The Embassy welcomed everyone with sushi, pasta, desserts with matcha tea and other Japanese specialities.
In the meantime, they all had talks or answered questions in interviews for the Japanese and Polish media.

21:30 Farewell to all guests with small gifts from Japan

The directors of Fukudenkai bid farewell to all guests individually by giving them souvenirs from Japan,
which was a lacquer box with a hamanasu flower stamp, which was designed by the Imperial Court - a sign of the Empress Masako.
The guests also received traditional Japanese sweets and a book about Siberian Children (link to the publication : https://drive.google.com/file/d/1KJiNj_uubsc_9OF7x7urnZ8JySkFFe5o/view),
along with previously conducted interviews with the descendants of the Siberian Children.

All children, attended the event, also received a kendama - a Japanese skill toy.

A great Ceremony on the occasion of the 100th anniversary of saving Siberian Children-2023 will be held both in Poland and Japan.
All members of the Siberian Children families were invited to next year's celebrations during the meeting in Poland.

We look forward to seeing you again next year!

The entire event was organized by the Japanese Embassy in Poland and the Fukudenkai Social Welfare Corporation.