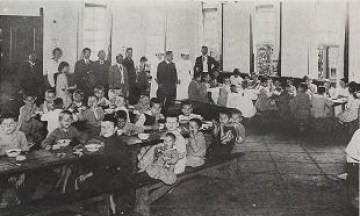 On September 16, PKRDDW was established with headquarters in Vladivostok. His goal was to find Polish orphans in Siberia who found themselves in a dramatic situation after the outbreak of the Bolshevik revolution. The idea was initiated by Anna Bielkiewicz and Józef Jakóbkiewicz, who was a young doctor. They were soon joined by Karol Zalewski, who later became a professor of phytopathology. In total, between July 1920 and January 1922, the Polish Children’s Rescue Committee of the Far East managed to save 877 children.

1920-1921
The first transport of Siberian children

388 children were transported from Vladivostok to Tsuruga, Japan. They were later placed in the Fukudenkai orphanage in Tokyo.

On April 6, 1921, when Sadako Kujou (the then Empress of Japan) visited the JRCS Headquarters Hospital, she walked to the children who came to meet her from Fukudenkai, and patted the youngest child’s head.

369 children and 27 adults went to Seattle and then to Chicago. Józef Jakóbkiewicz was responsible for their stay. The children were also supported by Helena and Jan Ignacy Paderewski, a Polish pianist and composer.

In January, children arrived at the port of Bremen in Germany and were transported by train to Poznań.

In August, a group of 379 children covered the same route again from Russia, arriving in Japan.
This time, however, they were assigned to the repatriation center in Osaka.

1923
Establishment of the Siberian Children’s Institute

Siberian children were moved to Wejherowo due to bad conditions in Poznań’s buildings.
On April 30, ZDS was officially created in Wejherowo.

1923
ESTABLISHEMENT OF ZWDS IN WEJHEROWO

Due to poor conditions of the facilities in Poznań, the Siberian children were moved to Wejherowo.On the 30th of April, ZWDS in Wejherowo was officially established.

Some of the Siberian Children decided to create an organisation. Their aim was to help each other, keeping siberian traditions and learning about Japan. The hairman of ZMzDW was Jerzy Strzałkowski. Soon, the organisation had more than 600 participants and the first offices were created in Warsaw and Wilno, as well as many clubs in Białystok, Bydgoszcz, Chełm, Gdynia, Poznań and Wejherowo. Most of the Siberian Children, having left Wejhrowo, lived in Warsaw. They also started their own magazine called “Sybiriak”, which was renamed twice in 1938. The last title, “Echo Dalekiego Wschodu” reffered to the magazine published by Anna Bielkiewicz back in Tokio.

ZMzDW was also highly involved in organizing cultural events along with Embassy of Japan in Tokio. Moriya’s help, they also conducted Japanese classes.